Four Places at Once?

I Have found myself traveling places that mirror the emotional feeling(s) I am going through in my personal life. As of recent, I have been pulled in many directions, feeling overwhelmed in all, conquered by all… but never defeated.

I have and continue to believe we learn most when we are challenged with unplanned obstacles. Sometimes the challenge itself is just finding the simplicity in what is hazed as complicated. Everything we do is rooted down to… will it matter a year from now, will it make me happy, will it make others happy and will I regret it if I don’t try it.

So that is what brought me to Arizona…the Four Corners (in Teec Nos Pos). By the way if you ever go you better have beef jerky (or the food of your pleasure), water and the old fashion foldable maps. I’m not kidding. I thought 2016, where wouldn’t one get cell coverage…toward the Four Corners Monument is where. And, for the record… I did do my research before planning the trip which really were endless amounts of blogs saying that this iconic monument was located in the middle of nowhere, and it wasn’t much but dome shape shopping area with the four states on the ground with the corresponding flags in each corner. They were right.

To be honest, although simple… Very simple I smiled at the thought of being in four places at once. People often throw around “I can’t be in two places at once,” however now when hearing that I can think “I defeated that idea.” Actually I back-bended into it. 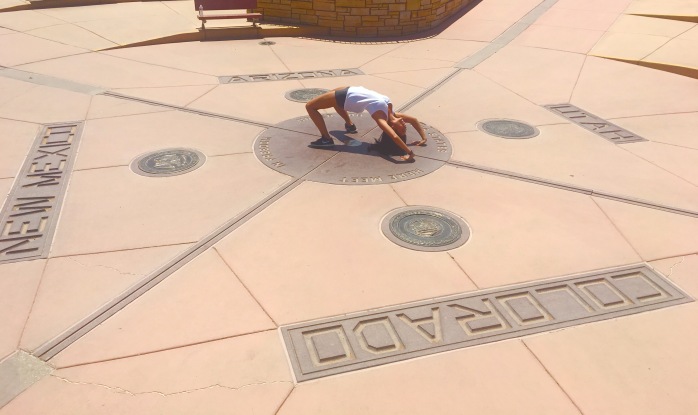 This was all smiles, until I went back into the car, pulled out of the gravel road in the middle of desert and didn’t know which direction would take me back to Arizona. Talk about a multiple choice question you didn’t want to get wrong– human interaction t minus 20 miles away. By the way… I guessed right.

Life lesson on this trip…relax…we as people become so involved in what we are doing that we forget to step back and enjoy the ride. And, Arizona is a long ride– from one main city to another is at least 50 miles of pavement, miles of endless rock but a whole lot of time to self reflect. But when you realize that in the end we are all we have, it is a fresh reminder that life isn’t bad, it’s about how we choose to see the outcome that is truly breathtaking.

Arizona Itinerary: Friday (5/27) Fly Into Phoenix , eat at Harumi Sushi, tour the city and then drive to Flagstaff at the Air B&B house. Saturday (5/28) Tour Flagstaff and head to the Four Corners Monument, drive to The Waves Monument– scratch that Horseshoe Bend, & end in Tuba City. Sunday (5/29) Tour Tuba City, tour the Grand Canyon, stop in Sedona to stop and eat at Sedona’s Pizza and head to Phoenix for a 5am flight back home.

*Was a lot of driving, but beautiful scenery, & the awesome playlist helped… Thanks Spotify. ** You have to make a reservation at least 10 months in advance to see The Waves monument, then it’s based on a lottery with only 5 permits a day, totaling 25 people. That sheds a new light when I tell you PLEASE win the lottery and give me your earnings, this is a must see!

← Everything Happens for a Reason
Head in the Clouds →